One of our most popular posts in recent years has been a guest post from mystery author Sue McGinty. She wrote about Hometown Marketing, and the importance of getting our books known in our own communities.

It helps if you’ve written those books with that community in mind. Not just to sell to that community, but because readers are interested in authentic settings and armchair travel: regional fiction sells to people all over the world.

I’m not saying we should only write for and about folks in the town we grew up in. But instead of writing for a mythical version of our high school English teachers, authors do better when they write for real people. Those people might hang out in the place you live. Or work in the industry you work in, or belong to the same church or arts community.

But My Book Will Appeal to Everybody!

According to Robert Lee Brewer of Writer’s Digest, one of the biggest mistakes new writers make is thinking that they are writing for “everybody.” We want to be universal! Like Dickens, Tolstoy and Shakespeare.

I sure thought I could write for some general audience — an undefined “them” I believed to be out there. I was going to write Universal Truth.

But I soon discovered that nobody can write for “everybody.” Somebody is bound to hate stuff you love and vice versa. So don’t write for those people. Write for people who like what you like. People you know. Not that you need to have bonded over salted caramel mochas at your local Starbucks. But learn who they are.

One of the things I learned back when I was on the query-go-round was that a certain type of agent almost always reacted positively (or at least kindly) to my work, and others…not so much.

Agents who had a background more like mine and liked books I like were more likely to ask for a read. Not really surprising, but a revelation when I realized that I could avoid a whole lot of rejection letters by researching personal stuff about agents instead of mass-querying “them.”.

And you know what agents were most likely to want to read my work? Agents in my state.  Yup. Being local matters.

Let your regional flag fly. No, you don’t have to give all your characters Boston accents because you grew up in Dorchester. But you also don’t have to assume a detached, authoritative professorial voice if that’s not how you and your friends speak. (Unless your protagonist is a detached, authoritative professor, of course. Academic fiction sells too — see our “Book of the Week.”.)

I always feel sad when I get heartbroken — and often angry — messages from unpublished authors who are obviously writing in English as a second (or third or fourth) language. They can’t make inroads into the English-language publishing world and want me to get them an agent or publisher. I tell them that if I tried to write fiction in Urdu or Polish or Italian (which I actually studied for years) I would get constant rejection too.

I had a message recently from a young woman whose English skills might have been learned from watching Borat movies. She thought I was cruel to say self-publishers look amateurish if they use incorrect grammar, since English grammar is so hard.

I know colonialism has a lot to answer for. But even though more people may read English than read your native language doesn’t mean you should try to write for all the inhabitants of the former British Empire.

I urge writers like this young woman to get established in your own language first. Succeed, and you can hire skilled translators to offer the book to the whole planet — later.

It sure worked for Steig Larssen, and his Girl with the Dragon Tattoo. Once he got to be #1 in Sweden, he could conquer the publishing world.

Write for Your Neighbors, not Movie Stars

You’ve heard jaded people say that to get published, “it’s not what you know it’s who you know.” And in a way, that’s true.

No, I’m not talking about sending your opus to George Clooney because your aunt once sat next to his second cousin on a plane. I’m talking about writing for the people you actually know. Especially the ones who read books.

Joining a local book club might help you write successful books better than taking a marketing class. (Just don’t try to push your own book on the group.)

And if you’re writing a regional story, instead of picturing your protagonist as a movie star, try picturing the guy at the gas station or the waitress at your local coffee shop. Not only will that help you write more interesting characters, but it will keep you grounded in your local setting.

And, as Ruth Harris wrote last month, being an “everyday star” can often create a more satisfying career than being a superstar.

A lot of us read as much for setting as we do for story. Think of how many authors we read for armchair travelling. We want to visit Tony Hillerman’s New Mexico, Louise Penney’s Quebec, Anne Cleeves Northeast England and Carl Hiaasen’s wackadoodle Florida. Most of us hardly remember the plots of mysteries like these. But we remember being there..

As people working from home escape from big cities to smaller towns, they want to know more about the region where they’re now living. What better way than to read regional fiction set in your new home?

And what made Where the Crawdads Sing such a success? I don’t think it was the not-exactly-innovative plot. It was the amazing setting — and the author’s knowledge of the native wildlife. Delia Owens knows the swamps of North Carolina inside and out from animal behavior studies she did there — and her local knowledge brought her fiction to life.

My mother, Shirley S. Allen found a home for her academic mystery novel with a mystery publisher that specialized in New England cozies, called Mainly Murder Press. She found them very helpful and supportive,. They liked that she had a ready-made audience in her circle of New England academic acquaintances..

Here’s where it gets sweet. With regional fiction, you have a ready-made hook to get local newspapers, radio and TV  to interview you. You can speak to local groups like Friends of the Library, Lions, Rotary, AAUW, or whatever group is most likely to have readers in your demographic. That includes retailers other than bookstores as well. If you’re a quilter, writing about a quilter protagonist means you can market to quilters. How about a launch in a fabric shop or art gallery?

“Oh, but I don’t want to sell to the local Rotary club. I want to sell to the world!” Sez you. But think about it. Local people have friends and relatives all over. If they buy your book for a relative in another region, and that relative likes it and tells her friends…you have that “word of mouth” we’re all looking for. Think of your hometown or community as the center of a wheel with spokes that go in all directions.

Not everything has to be done online. I think everybody’s a little burned out on spending on social media these days. I’m not telling you to drop your social media marketing, but you can cut back and look around you. People are getting out and about everywhere. Why not get your books out there with them?

What about you, scriveners? Do you write regional fiction? Have you thought of setting your story in your home town or state? Have you done any hometown marketing? 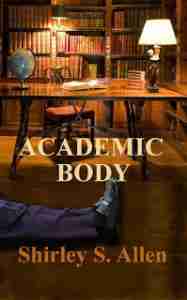 Retired theatrical director Paul Godwin longs for the quiet life of a college professor, but can he woo his famous wife away from the New York stage to become part of his academic life in small-town Maine? Not easily, especially after the dean accuses him of having a fling with a student and then is found dead in circumstances that make Paul a prime suspect in the investigation.

Paul’s efforts to discover the real culprit provoke dangerous reprisals, but he must succeed to save his new career, his marriage – and perhaps his life.