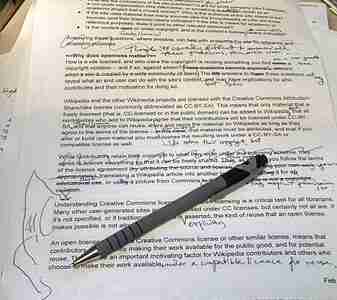 I’m an Amazon #1 and million-copy NYT bestselling author published by Random House, Simon & Schuster and St. Martin’s. I was also an editor for over 20 years. I worked at Macmillan, Dell and Bantam and for a small but thriving independent paperback house, now defunct—not because of me. 🙂 I was also the Publisher of Kensington.

I’ve been the rejector and the rejectee which means rejection is a subject I know a bit about.So let me cut rejection down to size.

Manuscripts get rejected; not writers.

It’s business and (most of the time) it’s not personal.

The reasons for rejection start with the basics, i.e. the ms. sucks. Author can’t format/spell/doesn’t know grammar or punctuation. S/he is clueless about narrative, characterization, plotting, pacing, and can’t write dialogue. S/he has apparently never heard of paragraphing and writes endlessly long, meandering, incoherent sentences that ramble on like poison ivy. You cannot believe the grotesqueries I encountered during my days in the slush pile.Sometimes, though, the ms. is not that bad and with competent editing, might well be acceptable. Unfortunately, the days of Maxwell Perkins are long gone.

Staff editors, these days, are greatly overworked and overwhelmed. They don’t have the time (or, if they are just starting out in the business, even the knowledge or experience) to edit the ms. into publishable shape. These days quality editing is the author’s (or the agent’s) responsibility.Occasionally, other hazards present themselves…

Way back when I was a child working at Bantam, a would-be author showed up at the office, his ms. in hand. As the least important, most expendable (what if this guy turns out to be a nut and has a gun?) warm body on the staff, I was sent out to Reception to find out what he was offering. Shook hands, introduced myself, he yackety-yacked, blabbity-blabbed about his masterpiece. Then he opened the ms. box to show me his jewel and a cockroach jumped out. True story. Ms. rejected. Politely, I’m proud to say.

On the other hand, the ms. might be really good: timely subject, credible characters, dandy plot, lively dialogue, well-executed pacing. Lots of us really like it. Some of us love it.BUT it could still be rejected for any number of other reasons, like…

We already have too many (insert your genre) and need to publish down the inventory so we’re not buying any of that particular genre. Sorry. Right now it doesn’t fit our needs. Nothing personal.

The P&L is the Profit And Loss projection publishers make for every book under consideration. The costs of publishing—printing, distributing, overhead, royalties, ad, publicity and promo, cover art and so on—are deducted from the projected income—that would be book sales, sub rights including audio, ebook, foreign, first and second serial, etc.

If the bottom line flashes red, you can guess what will happen next. Has nothing to do with how “good” or “bad” your book is. We tried but we just couldn’t make the numbers work.

Possibly the editor-in-question had a soul-sucking fight with his/her wife/girl friend/boy friend and is in such a lousy mood s/he’d turn down War And Peace.

Doesn’t happen often because we’re pros, know enough to watch out for our own quirks and biases, and will usually ask another editor for a second (or third) opinion, but, when the illogical runs rampant on a field of the irrational, fugetaboutit. You’re Tolstoy? Tough. Your masterpiece is toast.

We as a house excel with romance but are duds when it comes to science fiction. Maybe the buyer at a big distributor—or our Sales Manager, Editor-In-Chief, Marketing Director, CEO—doesn’t “get” (insert your book/genre).

If so, pop the champagne when your ms. is turned down!That’s right: because, even if some of us love it, win the battle, and buy it, your book will be published badly. You’ll get a lame cover, miniscule print run, zero advertising, promotion or publicity, spine-out positioning on a top shelf in the poorly-lit back of the unventilated, un-airconditioned third floor next to the men’s room.

You won’t be able to find your own book. Not even with a state-of-the-art GPS. Your book won’t sell. You’ll be miserable and you’ll blame us and you’d be right. You should also blame yourself for submitting to a publisher who’s the wrong fit for you and your book.Whatever the case, frame that rejection letter and hoist that glass of Dom Perignon.

You love your agent but we don’t.

Maybe there was a battle over contract terms that went off the rails. Perhaps we think the agent in question was double dealing, used us to bid up a price, or shafted us in some other way. Whatever the specifics, and no matter who was right and who was wrong, we’re currently on non-speaking terms with your agent and peace negotiations have not yet been initiated.

Perhaps your agent is borderline, sociopathic, or into drugs and/or booze. Trust me, it happens. We’ve had it with the tantrums and tirades and boozed-up, coked-up phone calls. The agent has been blacklisted not just by us but by just about every publisher in town. You don’t know any of this but your book will suffer the consequences. Yet another instance in which rejection has nothing to do with you—or your book.

The company’s in a cash crunch. Of course we’re never going to admit that (and our bosses might not even tell us) but we’ve been instructed to hold off on buying anything. Nada. Not right now and maybe not for the foreseeable future. Not until said crunch passes and the money’s flowing again.You don’t know it—and you never will—but your timing sucks. Not your fault.

A major “reorganization” has taken place. Maybe the whole company has been bought/sold/merged. Maybe the decision has come from somewhere Up There in Corporate. Anyway, half the staff (at least) has been fired.

A new regime is hired and they, the New Guys, are going to turn the company around by doing the opposite of what the Old Guys did. Not your fault, has absolutely nothing to do with you or your ms, but if you, your book or genre remind the New Guys of the Old Guys, you’re going to get rejected.

Sometimes editors and publishers are just plain wrong. Examples of that all over the place from J.K. Rowling to Stephen King. We turned down your ms.? Maybe we made a mistake. We screwed up in the past, we’ll screw up again in the future and we know it. Turning down the ms. that becomes a hot bestseller is a risk that comes with the territory. We don’t like it any more than you do but it’s a fact.

Once in a while, rejection is actually personal. We’ve published you before or a friend at another publisher has and we know from experience (or the grapevine) that you’re a whiny, nasty, demanding, narcissistic, high-maintenance PITA. No one wants to take your phone calls and everyone who’s had the misfortune of working with you hates you.

We’ve had it with you and your diva-like tantrums and we’re never, never, never going to publish another book of yours again. Except, of course, if you’re making us a boatload of money. Even then, we still hate you and we’ll tell everyone (off the record, of course) that your books “aren’t as good/aren’t selling as well as they used to.” Payback is a bitch.

Rejection can be an opportunity.

Now that writers have the option of self-publishing, rejection by traditional publishers has lost its sting and can actually be the stepping stone to a dazzling digital career.

Romance superstar Marie Force shares her experience with rejection and says: “Every romance publisher in the business rejected Maid for Love, book 1 in the McCarthy Series, which will soon reach 2 million books sold. Similar story when I was first trying to sell the Fatal Series—everyone loved Fatal Affair, except they didn’t love the plan for a series about the same couple in every book….One of my favorite quotes, “It’s just NOT DONE in romance.”

Um okay then! Book 8 just became the second book in a row to hit the NYT in the top 10.””The Fatal Series was eventually published by Carina Press when they came on the scene in late 2009 looking for outside-the-box stories. The Fatal Series was a great fit for their model. Fatal Affair was one of their debut books in June 2010, and the eighth book was released in January. The series has become very successful, and it is coming in print with the first seven being released in wide distribution this year.”

Rejection can be a friend.

Marie goes on to say: “I need two hands to hold all the rejections I’ve received (and yes, I kept them all as a reminder of the journey). I am thankful for every one of them now, because if even one of those NO votes had been a YES, I’d still be working for someone else and wishing for the career I have now. Rejection was my friend.”

Rejection can be a stepping stone.

Rejection is usually not about you: True Story #2

When I was a child slogging through the slush pile at Bantam, one of the editors was having an affair with a hotshot publishing executive, older guy, quite glam. He was married, natch, but that didn’t stop him from being possessive and very jealous.

She lived in the Village near a bar that served really good hamburgers. There was also a poet, a fixture in the nabe. The reigning Crown Prince of Rejection, he couldn’t get his poetry published no matter how hard he tried. He was a real sad sack, but a nice guy who became a community project: people gave him money, brought him food, treated him to meals, oozed sympathy at his tales of woe at the hands of clueless publishers.

Anyway, my friend is walking home from work one evening, runs into the poet and invites him for a hamburger. They’re sitting in a booth along a wall of windows having their burgers when along comes Mr. Hotshot Exec. He takes one look, gets the (erroneous) picture. He waits until my friend and the poet leave the bar, he goes up to the poet and, without a word, takes a swing at him, sending him sprawling to the sidewalk. Exec, crazed with jealousy, hurls a curse and barrels off.

My friend helps the poet up. Poet brushes himself off, looks at her and shakes his head. “I don’t know why people don’t like me,” he says.

As I said earlier, most of the time it’s nothing personal.

I once got a form rejection letter for a book (Husbands And Lovers) while it was on the NYT bestseller list. No kidding.Who knows why? I don’t and never will. My agent and I laughed our asses off and I went back to my computer and continued working on my next book.

You should do the same.

From “unsaleable and unpublishable” and “this author is beyond psychiatric help” to “boring” and “this will set publishing back 25 years” here are the brutal rejection letters of some of the bestselling books of all time.

How about you, Scriveners? Do you keep copies of your rejections? What was the most head-scratching rejection you ever got? Do you feel that a rejection has ever had positive results for you? We’d love to hear your stories in the comments!