“Chapter titles!?” sez you. What is this, the 18th century? What am I supposed to write? Something like this?

Chapter the first, in which our hero is born, discovers that fire is hot, learns to pull up his own breeches, and slays a smallish dragon.

Hey, those 18th century writers knew their marketing. A reader flipping through a book in the shop could get an idea what kind of things were going to happen in the novel if it had descriptive chapter headers.

But yes, I know chapter titles went out of style in the age of modern minimalism.

Hemingway didn’t need no stinkin’ chapter titles. Neither did Fitzgerald or Faulkner.

However, some of the postmoderns later ventured into chapter title waters. David Foster Wallace used them in Infinite Jest, and John Barth titled his chapters in The End of the Road.

And in the 1990s, Annie Proulx used chapter titles to great effect in her Pulitzer Prize winner The Shipping News. Most of the chapter titles are the names of sailors’ knots, or other naval terms. Each chapter embodies a certain kind of knot, like “Love Knot”, “Strangle Knot” and “A Rolling Hitch.”

But chapter titles are making a big comeback in the age of the e-book.

Because of the “Look Inside” function on a book’s buy page at most online retailers. This is where you make or break your sale, as Ruth showed us in her great post on How To Lose a Book Sale. Most retailers insist on a Table of Contents in your opening pages. And the average Table of Contents of a novel looks like this:

Is that really what you want taking up the valuable real estate in your “Look Inside”?

Compare that with Rick Riordan’s current #1 Bestseller, The Red Pyramid

Which table of contents is more likely to intrigue a reader?

“Yeah, well,” sez you. “Rick Riordan writes for kids. I write for adults!”

It’s true that chapter titles are much more common in children’s literature, but savvy adult authors are using them too.

Delia Owens used chapter titles as well as titled sections in her runaway bestseller Where the Crawdads Sing. The titles intrigue readers as well as orient them in time and space.

It sure is more interesting than a list of numbers isn’t it?

Delia Owens not only hit the NYT bestseller list with a debut novel — an amazing feat in itself — but she stayed there through 2019 and part of 2020. I wonder if her chapter titles had anything to do with her initial sales?

What if you Write Super-Short Chapters, like James Patterson?

I’m a fan of chapter titles, as a reader and a writer. My first Camilla novel, The Best Revenge, was rejected by most of the agents I queried with my first version back in the 1990s. But several said they liked the chapter titles. They were a rarity in those days.

I used fun titles like “Clark Gable’s Ears” and “Mrs. Lester Stokes Does Not Go to Bergdorf’s.” They let the reader know from the get-go that it’s a funny book, and give an idea of the story arc.

But when I got to Book 5 in the series, So Much for Buckingham, I was writing much shorter chapters (on the advice of my editor.) No room for a clever title for each chapter. So instead, I named the sections — using a quote from Shakespeare’s Richard III for each 10-chapter part. The book’s title itself is a quote from Richard III, “Off with his head. So much for Buckingham.” (Although Shakespeare actually never wrote the line. It was added by the 18th century actor, Colley Cibber.)

So I had 8 parts to name. It was great fun finding the quotes, and they show to any prospective reader that the book probably has rather a lot to do with Richard III. (Who appears as a ghost.) And it gives a hint that this is not going to end tragically.

So even though I didn’t give titles to the short chapters, I titled the main parts, which gives some information to the reader browsing the “Look Inside”.

How Do You Choose Good Chapter Titles?

You don’t want your chapter titles to give away too much of the story. A chapter toward the end of a mystery that’s called “The Butler Did It” would probably be something of a spoiler. At least if the butler actually did it. 😊

But otherwise, you can do pretty much whatever you do to compose your book titles. Here’s my post on Choosing Book Titles.

Quotes make great chapter titles. A quote from the chapter is always good. Or a quote from a famous poem, book or play. It’s best to use classics to avoid copyright hassles. Although a short quote from most prose works are considered “fair use.”

Unfortunately lyrics from songs written since 1925 are out. However, you can use the song title because titles can’t be copyrighted. So your title can be “Jumpin’ Jack Flash” but not “Jumpin’ Jack Flash is a Gas, Gas, Gas.” For more on when you can use song lyrics, see our guest post from Michael Murphy: So You Want to Use Song Lyrics in Your Novel?

Chapter Titles Can Work as a Rough Outline

I’m mostly a pantser. I have a general idea of the story and jot it down before I start. But as I think of fun chapter titles, I write those down too.

Then when I start a new chapter, I like to choose a chapter title first. It may change, but it gives me an idea of where the chapter should go. And I sometimes make it into a kind of game.

So I’m having lots of fun thinking up fish-related sayings to use as chapter titles, like “Fish and Visitors”, “A Find Kettle of Fish”, “Shooting Fish in a Barrel”, “Sleep with the Fishes”, and “Other Fish in the Sea.”

Often thinking up the title first gives my chapter the momentum it needs.

Even if you don’t title each chapter with something clever, you can tell the reader where they are and also keep the reader from nodding off during those four pages of chapter numbers. Maybe something like this:

See how much more interesting that is than a list of numbers? And it will help a reader navigate what looks to be a rather complicated timeline. Pinpointing your chapter in place and time is essential, as Ruth advised us in her post on Deadly Writer Sins.

Chapter Titles Can Keep a Reader Turning the Pages

So you get to an exciting bit in the story, where Muriel has been kidnapped by Al Capone’s henchpersons, and she sees an incredibly bright star-like thing in the sky and wishes on it for a rescue.

And the chapter ends.

But if the next chapter has an intriguing title like “Al Capone Tries to Whack a Girl Space Alien,” you might be more likely to continue than if it just says “Chapter 7.”

So if you’ve been taught that chapter titles are childish or old-fashioned, think again. In the 21st Century, they’re trendy again! 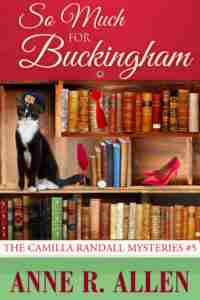 SO MUCH FOR BUCKINGHAM: Camilla mystery #5

This comic novel — which takes its title from the most famous Shakespearean quote that Shakespeare never wrote — explores how easy it is to perpetrate a character assassination whether by a great playwright or a gang of online trolls.

Camilla makes the mistake of responding to an online review of one of her etiquette guides and sets off a chain of events that leads to arson, attempted rape and murder.

And there’s a cat.

“Laughs and social commentary abound in this global adventure. Camilla Randall, a down-on-her luck-socialite-turned-etiquette-expert, takes on review cyberbullies while her friend Plantagenet hunts down the ghost of Richard III. Anne R. Allen has given us a hilarious satire that pokes fun at some dark topics. And we get a mini refresher course in English history to boot.”–Maggie King

Available in ebook from:

Audiobook from Audible  and iTunes