Mickey Spillane famously said “They read to get to the end. If it’s a letdown, they won’t buy anymore. The first page sells that book. The last page sells your next book.”

I can see the creative writing students rolling their eyes. Mickey Spillane wasn’t exactly a great prose stylist. But the guy knew how to write books that sell. He sold 225 million of them.

And he sure was right about that last page.

He didn’t mean you should leave characters hanging off cliffs so the reader will be forced to read the next book. Cliffhangers make readers feel betrayed. If somebody reads a whole novel and doesn’t find out what happens to the characters, they get angry. And angry readers don’t buy more of your books.

I recently read a major New York Times bestseller by a big-name author. The ending was so terrible I would have thrown the book across the room if it hadn’t been on my beloved Kindle.

I will never read another book by that author.

I’d been hopefully clicking through the pages, anticipating that big moment when we’d find out who the bad guys were and how the hero stopped them. But the reveal was predictable and left lots of stories hanging, so I read on, wanting more.

And yes, there was more: on the last page we discovered those weren’t the real bad guys and some much worse guys were already implementing a much more devastating evil scheme.

That would have been annoying enough in a series or a trilogy. But this author hasn’t written a sequel. And there’s none in the works, that I know of.

It was as if the author had simply stopped the book with a big. “Neener-neener. So long suckers!”

Maybe the author considered this arty and cleverly nihilistic, but it came across as a nasty betrayal of the reader’s trust.

The Last Page Must Leave the Reader Satisfied

What is a satisfying ending? It’s one that fulfills the promise made at the beginning of the book.

And one that is appropriate to the genre.

If the bestseller I hated had been a poetic, literary meditation on the deterioration of human civilization in the 21st Century, that ending might have worked. But there were no gorgeous passages of philosophical wisdom or sharp commentary on the devolution of Earth’s sentient primates that would make it a literary novel. It was billed as a thriller. And it was indeed a page-turning spy adventure until that last page.

A thriller should thrill, of course. And the higher the stakes, the better. But the hero must get the bad guys and thwart their evil plans by the last page.

And a mystery that doesn’t solve the crime? The author might be the next to get that lethal, undetectable poison.

Or an epic fantasy where the hero does not fulfill his quest? Forsooth, knave, surely you jest!

What Does a Final Chapter need to Do?

I was guilty of #7 in one of my first novels. I was devastated when the ms. came back from the editor with the whole last chapter crossed out.

“But I want the reader to know what happened to all the characters,” I said.

“The story’s over. Nobody cares,” he said.

And of course he was right.

What about Ending a Book in a Series or a Trilogy?

It’s best to write a satisfying ending for each book in a series, although you can hint at what is to come. But don’t fail to resolve the main story arc.

And if you leave a character hanging off that cliff, you’d better have written the next book and make sure it’s available for the reader to buy asap.

For a trilogy, the rules are a little different. A trilogy is basically a three-part novel, so you can leave the reader with more cliffhangers than you can with series novels. But be careful! Use cliffhangers sparingly. Ending a book without a resolution usually annoys rather than intrigues.

Write Your Last Page First and Your First Page Last.

I always say it’s best to write your first chapter last, and last chapter first. Or at least be able to visualize your ending before you begin to write a novel.

I still think that’s the best plan. But I wasn’t able to follow it with my own current WIP. 🙂

Last week I finished the (very) rough draft of the eighth Camilla Randall Mystery, Catfishing in America. Fear of writing that last page paralyzed me for weeks.

All the things a final chapter must do swirled around in my head, making the task even more daunting. Since I’m a pantser, I only tend to jot down notes instead of writing a formal outline. And I’d had a series of medical catastrophes that kept me from doing any creative writing for over a year, so the notes didn’t mean much to my forgetful brain when my muse finally returned.

Luckily, when I finally sat down to write that last page, I realized the ending was still in my head. I’d envisioned that scene from the time I wrote the first line.

What helped me remember was reading the first chapter again. Once I tied them together, I knew what to put on that last page.

Now, of course, I still have to revise that first chapter. I’ve got lots of revising to do.

Authors tend to obsess about the first line of a novel. We may spend forever polishing and perfecting that sentence, hoping it will entice new readers.

But we often dash off the last line in a rush to write that final “The End” on the manuscript. We forget the last line has as much power to hook readers as the first.

My favorite last line in classic literature is the ending of The Importance of Being Earnest.

“On the contrary, Aunt Augusta, I’ve now realized for the first time in my life the vital Importance of Being Earnest.”

Oscar Wilde’s line, which is designed to get a laugh, not only gives us the title of the play, it also ties up all the threads of the story. Jack refers to the fact that pretending to be named Ernest got him engaged to his true love, plus “earnestly” coming clean solved the tangled mess he and Algernon made with their deceptions. And, of course, it turns out Jack’s real name is Ernest.

We are not all writing comedy, and a line like that would be out of place in a drama. But it is satisfying to the writer and the reader alike when you can tie up all your themes and story threads on that last page.

When I wrote The Best Revenge, my prequel to the Camilla series, I knew I wanted to end with the line, “Living well is the best revenge.” By giving Camilla a newspaper column called Living Well, I set that ending up early on. A number of readers have told me they enjoyed that last line.

“And so we beat on, boats against the current, drawn ceaselessly into the past.”

With it, Nick is telling us what destroyed Gatsby — his obsession with Daisy and the past.

I’d hoped to end The Gatsby Game, my novel about a Fitzgerald fanatic, with Fitzgerald’s line, but the book isn’t a comedy, so using the line came across as a bit silly. However, I was able to title the last chapter “Boats Against the Current.”

I’m not saying every author should obsess over their last lines, but do give yours some real thought.

It may just sell your next book.

What about you scriveners? Do you obsess about last lines the way I do? How do you feel about books that end without resolution or leave you with a cliffhanger? Do you spend a lot of time writing that last page? Do you have a favorite last line?

Strong endings of chapters are important, too. Check out this post from author-publisher Jessica Bell.

What happens when a writer starts believing he’s living in a Fitzgerald novel?

Based on a real-life corpse found on the set of a Burt Reynolds movie.

(For more on this, and the tabloid accusations that Burt Reynolds murdered David Whiting, see my book blog. 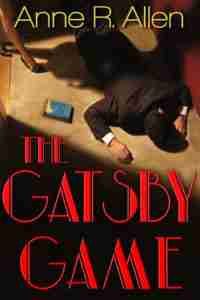 She’s the only one who knows what happened. But she also knows nobody will ever believe her. The story is based on the real mystery surrounding the death of David Whiting, actress Sarah Miles’ business manager, during the filming of the 1973 Burt Reynolds movie The Man Who Loved Cat Dancing.