Secondary characters are often glossed over in popular fiction. They’re in the story to further the plot, and can sometimes devolve into broad stereotypes or cardboard cut-outs while the protagonist (and maybe love interest) dominate the story.

You can avoid the problem if you think of the secondary characters as “supporting actors” like the ones who get the interesting awards at the Oscars. You know: the ones that have you saying, “I’ve never heard of her, but she looks brilliant in that clip. I’ll have to check out the film”

When I was an actor, I usually auditioned for those “secondary” characters. I found them more interesting and challenging. I went for Vera Charles instead of Auntie Mame, Mrs. Gibbs instead of Emily Gibbs, The Wicked Witch instead of the Good Fairy. I used to say I specialized in witches, bitches, and moms.

There’s an old joke in the theater about the annoying minor player who constantly asks the director, “What’s my motivation?” But that is exactly the question you should be asking about your secondary characters.

Why does that hot mechanic who keeps the heroine’s ancient VW Rabbit alive happen to be driving by her house at midnight when she’s being attacked by evildoers? Why does the sassy best friend always appear when she’s called? Doesn’t she have a family? A life?  And what about those evildoers? Why are they doing evil, anyway?

1. Give Your Secondary Characters Goals and Motivation

I’m not telling you to give a backstory to every character in the book. Not on the page. But if you, the author give every character a goal and motivation for their actions, you’ll have a richer, more believable story.

This is what actors do — even if they’re just playing a minor character. If the director tells them to make a slouchy walk from stage left to stage right, sit on the beanbag chair, and play the  bongo drums, the actor has to figure out a reason their character wants to slouch, sit in that particular chair and play drums. If he doesn’t understand his character’s goals, the audience is going to see an annoying robot walking around the set making noise for no reason. Even though the reason isn’t spoken, the actor’s movements will show he knows what he’s doing, and why.

It’s the same with your secondary characters. Give this guy a reason to act like he’s a 1950s beatnik, even if it’s not on the page. It’s amazing how his dialogue will take on sparkle and his interactions with other characters will be more interesting if the author knows more about him.

2. Beware Too Many Secondary Characters and Subplots

The other big problem a lot of writers run into comes from the opposite kind of thinking. They have wonderful secondary characters, with fascinating backstories, and they keep showing up “on stage” until he poor reader starts saying, “Is this the guy with the bongo drums? Or is this the hot mechanic who fixes old Rabbits? Or the next-door neighbor who thinks our heroine is a witch? And what happened to the stalker ex-boyfriend? Is he one of the evildoers?”

The same thing is true of subplots. If you give each secondary character a subplot, you’re going to have the reader flipping the pages back to previous chapters, trying to remember who this is and why we’re suddenly in Southeast Asia with a bunch of smugglers who deal in old German auto parts.

A confused reader is not a happy reader. And unhappy readers don’t finish the book. Or buy more from that author.

Story overpopulation has always been my problem. I once wrote a 500-word flash fiction piece with 10 speaking characters. It’s the way my imagination works. More and more characters keep showing up on the page. And they’re all fun. So I let them hang around even if they’re not driving the story forward.

And slowly the story gets bogged down and I’ve totally lost the plot.

If you have this problem, sometimes you’ll find several characters can be combined into one. Maybe you don’t need the sassy best friend if there’s also a feisty grandma your protagonist confides in. And does your heroine need 10 different suitors? Maybe some can be combined and others can be relegated to minor character status.

This is a particularly difficult problem for series writers. I run into it with my Camilla Randall series — tagged as “Murder, Mayhem, and Mr. Wrong.” Camilla has a doomed love affair with Mr. Wrong in nearly every book. This means there’s a growing number of ex-boyfriends. One Mr. Wrong is a cop, one is an international smuggler, another is a morally-challenged TV newsman, and her fave is a rock and roll musician with phenomenally bad luck. These characters move in and out of the stories, but since I want each book to work as a stand-alone, I have to be careful.

If you keep a series bible, you’ll know how these secondary characters have interacted in the past, and you can use a kind of shorthand to describe them as they reappear. If they’re only walk-ons in this novel, don’t give them too much time on the page. And we don’t need their point of view.

4. Keep Minor Characters in their Place

One of the mistakes a lot of beginning writers make is giving minor characters too much attention. Minor characters are the Uber driver who found her missing phone, the pizza delivery girl who messed up the order for spinach pizza with anchovies and pineapple, the grumpy cop who won’t believe there’s a serial killer targeting owners of vintage VW Rabbits.

Those characters do not need names or backstories. We don’t need to know Pizza Girl just broke up with her boyfriend or Uber Driver is a former child star on the skids, or Grumpy Cop is two weeks from retirement.

Simply call them The Uber driver, the pizza girl, and the grumpy cop. You can give them a short physical description that will help the reader recognize them if they appear again. Uber Driver can have a gray ponytail, Pizza Girl can have purple hair, and Officer Grumpy can have a bad comb-over.

Unless one of these characters plays an important role later — like Pizza Girl is really the Rabbit serial killer — don’t draw the readers’ attention to them. They help the story function, and they can be colorful, but we don’t want to give them names or get into their internal lives or the reader will be too overloaded with information to follow the main story.

If you fall in love with the Uber driver character and are dying to give him a name and some more page time, jot down your ideas in your idea notebook and put him in the next novel. Or a short story. That former child star on the skids doesn’t have to be completely deleted. Just save him for later.

5. Let Your Genre Dictate the Number of Secondary Characters.

With mysteries, we need a lot of suspects, so 2-5 characters would not cut it. Agatha Christie always had around ten suspects in those English country houses. And big family sagas and epic Fantasy need dozens of characters. On the other hand, Romances and other more personal novels would be ruined by a large cast.

If you do need a lot of secondary characters in your novel, don’t let them talk too much. This was also one of my problems when I started writing novels. Too much dialogue can slow a story down. But I had an editor who taught me that a novel is not a play. He helped me create a better balance between dialogue and narration. I wrote a post about it called Do Your Characters Talk Too Much?

Most important of all, don’t neglect your secondary characters. You don’t need to tell the story from their point of view, but they need to be complete people in your mind, with goals, motivation, and backstories. Your readers may not know all those things, but they will find the characters more compelling if you take the time to flesh them out.

What about you, scriveners? Do you pay enough attention to your secondary characters? Or too much? Do you worry you have too many characters in your novel? 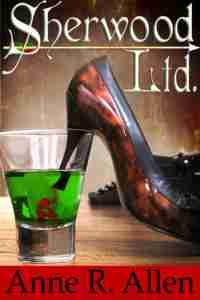 Suddenly-homeless American manners expert Camilla Randall becomes a 21st century Maid Marian—living rough near the real Sherwood Forest with a band of outlaw English erotica publishers—led by a charming, self-styled Robin Hood who unfortunately may intend to kill her.

Here’s a great write up of Sherwood, Ltd from Debra Eve at the Later Bloomer

Available in ebook from: