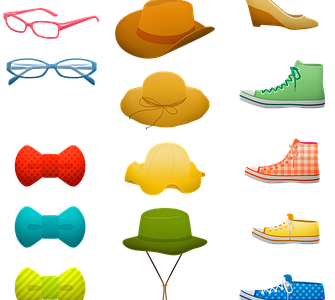 The nip slip and wardrobe malfunction make good fodder for the gossip sites, but, for writers, wardrobes — clothes and accessories — are a powerful tool in the arsenal.

1.  Clothes and accessories show, not tell.

They have their own language and vocabulary and can do a great deal of heavy lifting for writers.

The way your characters choose to present themselves through their coats and blouses, puffers, dresses, and workout wear, bracelets, belts, ties, and lingerie can foreshadow clues in a mystery, signal progress (or lack of) in a romance or provide unsettling events in a psychological thriller, represent an era in historical fiction.

Whether you’re writing sci-fi set on a faraway galaxy in the distant future, romance with a fire fighter, a medical thriller set in the present, or a spy story set during the Cold War, the clothes/uniforms/safety gear your chracters wear — or don’t wear — are a significant part of the story.

Whether you’re writing about a big city fashionista or a suburban stay-at-home-Mom, a tomboy in a small rural town, a 1920s flapper, a 1960s go-go dancer, a 1980s exec headed to the corner office in her jacket with power shoulders, a young skate boarder, a starving artist or a Queen, modern or otherwise, the characters will be different and their clothes will be different.

Whether you’re writing about Cardi B or Lady Gaga, Angela Merkel or Greta Thunberg, about Catherine the Great or the girl next door, their clothes are your secret weapon, a crucial part of the author’s tool kit, an essential way to bring your characters into sharp focus for yourself — and for your readers.

By the way, speaking of writing about a Queen, did you know that the hems of Queen Elizabeth’s skirts are weighted so that no errant gust of wind can blow her skirt up?

Never a photo of Her Majesty with her underpinnings revealed.

Wouldn’t that be an intriguing plot point?

Not to forget, but doesn’t MarkZ look awfully shifty as he testifies before congress? Is he lying? Is he nervous? Or is he just uncomfortable in a suit? Reader wants to know.

And what happened when Anna Wintour lost her glasses while on a fashion shoot in a remote area of Borneo? Was the heat getting to her? Or was it something else? Who — or what — took Anna’s sunglasses? Reader wants to know that, too!

4.  Shoes. They’re made for walking. Or for running.

Actors say that finding the “right” shoes for the character they’re about to play is key. Our characters’ shoes also matter.

5.  Scarves, jewelry and accessories — lethal or not.

Looks can reveal the truth or looks can deceive. The twists and turns are up to the writer but wardrobes accurately described, can launch an engaging, twisty plot.

Take the socialite out of the snooty bistro, put her into vegan lunch counter and you have the beginnings of a plot. What will she think of the bearded video artist who, apparently needing to make a little money, serves her the organic sprout sandwich? What will he think of her? Intrigue? Disdain? Conflict maybe? Leading to sparks?

Then the twist: the “starving” artist working in an organic luncheonette turns out to be a good-guy Department of Health Inspector and the fashionista turns out to be the devil in (knock-off) Prada.

Whatever your character wears — or doesn’t wear — underneath his/her clothes can be turned into a plot point.

In The Big Six Oh!, narrator Blake Weston’s frenemy, the Glam Gourmet, is famous for her red balconette bras and jackets unbuttoned down to the Mason-Dixon line. When Blake worries her husband might be straying, the GG offers advice, but Blake resists.

“Maybe they should be.”

Maybe she was right.

If you’re writing historicals, don’t forget that corsets were abandoned in the 1920’s, that underwire bras became popular in the 1950’s and that recently a bra dating from the Middle Ages was found in Austria.

Let’s not forget our heroes, either, the bad boys and the good ones.

9.  What if clothes could talk?

What would they say?

Would there be truth? Or consequences?

Only the writer knows.

And only the writer can tell — and show.

What about you, scriveners? I love adding accessories to my characters. Camilla has her Hermes scarves and designer shoes left over from a more prosperous life.. Do you use clothing to identify or define any of your characters? I think Ruth has given us a wealth of writing prompts here as well!

The Big Six-Oh by Ruth Harris “Loved it! One ex-cop who doesn’t want help solving a murder. One current wife whose help he needs to catch the killer. One couple meant for each other who fall in love all over again after decades of marriage. Funny, exciting and very romantic.” —Reader Review

Blake Weston, is a smart, savvy, no BS former fashion editor. Her handsome, sexy husband, Ralph Marino, is a très James Bond ex-cop and head of security for an international media company.

When Blake buys a faux Chanel bag from a sidewalk vendor, the danger starts—but doesn’t end—with a scary mugging in broad daylight. From there, it escalates to face-to-face encounters with a gun-toting jailbird, a lovelorn Afghan war lord, and a celeb chef in a red balconette bra.

Meanwhile, Ralph is about to hit the Big Six Oh! and he’s not happy about it. Not that Blake is exactly thrilled. Especially now that she suspects Ralph might be cheating on her. Again.

Right when Blake and Ralph are forced to work together by his über-neurotic boss to bring down a deadly global counterfeiting ring—and save Ralph’s job.

“Funny and charming and a delight to read!

Really yummy. It is a rare author who can bring to the page such vivid and believable characters with so much sly wit and style.” —Reader Review

“Perfect for those of us not looking for bubble gum chick lit.

The relationship between savvy Blake Weston and her ex-cop husband Ralph Marino is realistic and down to earth. And yet the extraordinary circumstances they find themselves in kept me flipping the pages well past my allotted reading time. If you’re looking for a wonderfully fast-paced read that will take your mind off whatever you’re stressing about, Harris’s The Big Six-Oh! will fit the bill.” —Reader Review

Find the Big Six-Oh at these retailers